It´s been a week that I have the MacBook Air. The small 11 inches one, with 64 Gigs of storage and 4 Gigs of RAM. One friend asked me about it, and another one wanted help to set up his new Mac. I used to have a page for setting up a new Mac, but it was lost on my recent migration from my old german webpage. For them, and everyone who might find it of help, here is my not complete, or even fair, review, with some points and recommendations. 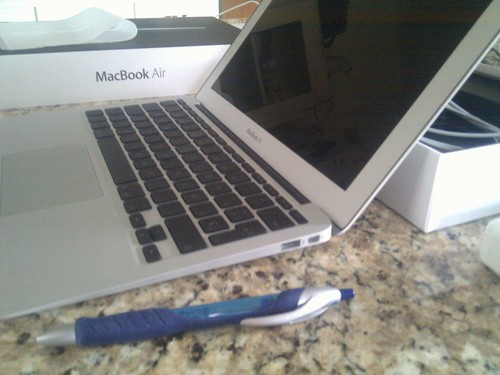 First of all, it runs OSX, my main reason to choose an Apple.

Yes, I really like it. All other laptops will look way to thick, heavy, noisy and slow. The unibody technology makes it feel sturdy.

So far, I don´t miss the DVD drive or the extra storage. My SSD drive is 64 Gigs. I have a external 500 Gigs (2.5’’ 1xUSB powered ) with a copy of my old mac, and the Time Machine backup for the Air. I only plug it to run my old iPhoto library from it (pressing “alt” on run) and add new pictures. I think I´ll set up my old mac as a home server and connect remotely when needed. Or may be just move to the cloud. It seems that having a cloud drive with your stuff might not be so expensive.

2 USBs seems a working minimum. Actually makes me wonder why not make a truly universal socket. Like a USB but also for the external monitor, for Ethernet, for AC, … It kind of makes sense.

The battery lasts forever. I tested it for my flight from DC to Frankfurt. On the gate, on the flight, on the train. Summing up to almost 8 hours of use (no WiFi, no movies, just typing and reading on medium brightness). The charging time is like 1 hour. One caveat. Make sure flash is not running or it will cripple the battery to half the duration. You can check that on Activity monitor, and also kill it. 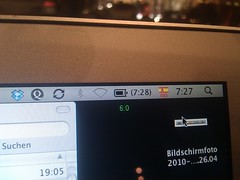 It does not have Ethernet, only WiFi. I thought I woud not need it, as most of my environments have WiFi (Home, hotels, cafe). As true as it might be, I ended up buying the USB to Ethernet adapter 2 days ago. Another thing to carry along, together with the monitor adapter and the charger.

In conclusion. The laptop is expensive compared to seemigly similar netbooks. Yet I would argue that the quality, finish and underlying OS makes it ahead any other option. At least for me. The price is also similar to a MacBook Pro. For my usage, and my estimation of where the market goes, the Air was the winner.

Instead of migrating from my old MAC, I chose to start from scratch. These are the steps I did to have it up and running:

-Network speed with this geeklet script

-Battery info. It tells when is fully charged, time to reach full charge, or remaining battery time. It also warns if Flash is running while on batteries.

I´ll probably add more things, but these are the basics for me.