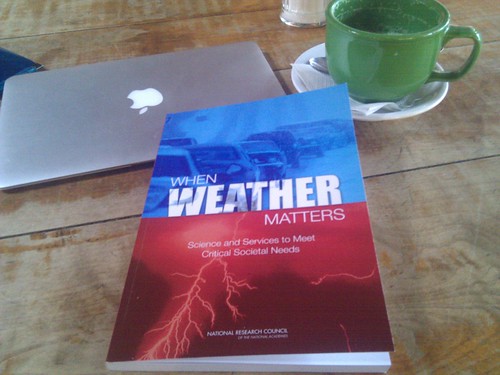 This [free as pdf] NAP book is a report from the 2008 NRC Board of Atmospheric Sciences workshop: “Progress and Priorities of U.S. Weather Research and Research-to-Operations Activities”.

Despite the chaotic nature of Weather, scientist are currently able to measure (nowcast) and predict (forecast) weather with unprecedented accuracy. Almost certainty within hours, and may be a week at best with 50% chance. But:

The U.S.A. has the world´s most sophisticated and well-developed weather forecast infrastructure. The federal government also spends, annually, $5 billion in research and operations only in NOAA, and  $6 billion for an dedicated agency on disasters (FEMA). Academia and private partners are also tightly involved.

Only the generation of weather forecast cost overall $5 billion annually, but its benefits are (quoted on the book as) 6 times the cost. Despite these impressive benefits on paper, there is much room for improvement.

In research, spatial and temporal mid- to long-range weather forecasts remains elusive. So do rare but important events like volcanic ashes. Regarding operations, specially responding to natural disasters, recent history has shown there is much room for improvement. The mismanagement of Katrina is most prominent, despite the fact that there was an almost perfect 48 hours path forecast.

The NAS committee recommend a set of action that clearly define a measurable path for improvement. Among then, the following:

Lastly, I would like to point out that the book has a very interesting Appendix on “Gaps in Knowledge and Practice for the next Decade in Urban Meteorology”.

Update: Posting this yesterday seems very timely, as today Cyclone Yasi breaks in all headlines around the world. You can indeed see an early warning, track forecast and impact predictions. Is it enough information? What else do we need to predict? and on the other hand, What is being done? Is it enough? Only time will tell us. Land fall has just occurred as I write this, with 10-minute sustained winds of 215 km/h and gusts of 295 km/h.

The cyclone is huge, but so is Australia. For comparison I´ve just seen a satellite atmospheric map, but shifted so that the storm is over USA. Daunting.