Charging your battery using ultrasounds and no cables? Is that possible? I heard it was, but not how, so I made some sketches on how it could have been done.

Last week a colleague at work  told me she heard on NPR that “a young girl patented a system to charge batteries using ultrasounds.” My immediate reaction was to question if it really was ultrasounds (pressure waves) rather than electromagnetic waves. RFID, induction, WiFi, … are all widely known to carry energy over the air using these (not yet used for charging, though). She was positive she heard ultrasounds. On my way home, without knowing anything else,  I kept thinking about it and, once home, I made some sketches. 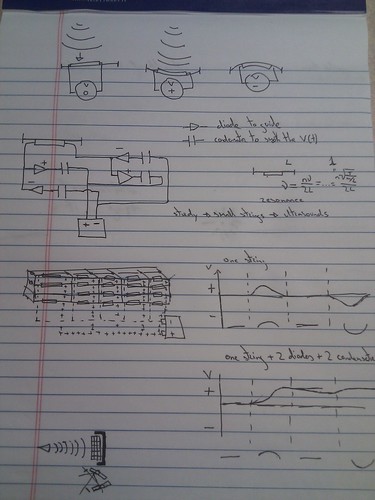 The system is based on small piezoelectric rods. Piezoelectric means means electricity resulting from pressure. Some speakers use that method to function. The idea is that the pressure wave will bend the rod, creating a small charge. As the rod vibrates under the pressure wave, the charge is directed an accumulated into the battery.

To maximize the output I´ve placed two small diodes to guide the current to the right pole on each halve of the vibration. I´ve also placed small condensers to smooth the voltage.

The rod itself can be composed of normal plastic (or naylon) and leave only the central part with the active material. The center is where maximum deflection (hence max voltage per length) is produced. This will reduce the cost.

Whatever the length of the rod is, it imposes a particular resonance frequency of emitter, but if we want the device to be sturdy, it better have smallish rods tightly attached on the sides. Smaller lengths calls for higher frequencies, which, in turn carry more energy. That´s why we´ll use ultrasounds. Also because they can go through thin covers, like the ones we might want to put on the device to make it nicer looking and waterproof.

The receiver  could be a net of small rods mounted on a grill-like frame. The depth of the frame should be one half multiple of the ultrasound frequency and of reflective material, to help in the resonance and minimize energy lost.

This, in principle should work. However, my concerns would be on:

Next morning I looked up on NPR the news piece my friend mentioned. She was right, it was ultrasound. Quite impressive to know how young the inventor is (and glad she is a woman). Her name is Meredith Perry (@meredithperry) , and the newly created company is Ubeam. I cannot find the design concept, but I wonder If I came close.

Either way, congratulations Meredith. I wish you best of luck! If you ever pass by DC, I´d love to chat with you about this and other ideas!!