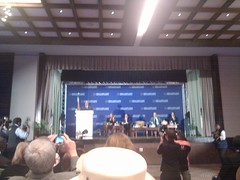 The World Climate Summit (WCS) began with a keynote from President Zuma, followed by a set of 7 high level speakers who discussed how greening the global economy is not simply a reactive “who pays the bill” debate, but a whole new direction for better growth. The question is: is change happening at the pace it could and should, and if not, why not?

The conversation started right on topic with Christina Figueres, UNFCCC Executive Secretary, stating that governments are moving slower than what the UNFCCC wants, and much behind of what science says. Businesses, however are moving much faster, in a way that sets the bar, but she urged them to do more.

Juan Costa Clement, Global Leader for Climate Change at Ernst & Young, argued that a prominent agent of that change is transparency, information and advice. Focusing on servicing these three can speed up the process. Once people have full information, they will make the right choices.

He also noted that we should redefine the way we measure economies. Metrics like pure GDP do not take into account factors that we now see to be relevant, like environment and ecological values. Value in these new green economies is created not only by increasing GDP.  In this regard he also noted that there is a misconception that “green economies” are more expensive than “carbon economies.” Studies by E&Y show that that this is not always the case and, in fact, employment creation potential can be twice that of current carbon-intensive economies.

Barbara Kux, Siemens Chief Sustainability Officer, made the interesting observation that all three recent crises, and actually most others, have in common the absence of long term thinking that includes sustainability.  Not only that, according to their studies, we could reduce global emissions 38% by using technologies that are already here, but underused (e.g. LED lights).  Paradoxically these viable opportunities to green our economy are not only doable in the short term, but also they are extremely profitable. Independently of COP, the estimations of green market opportunities keep increasing and are already beyond the €3 trillion mark 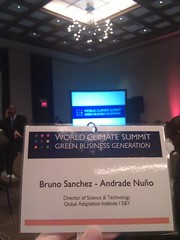 Elizabeth Littlefield, CEO of OPIC, the US government branch that invests overseas, recalled that last year in Cancún she committed to increase their investment in renewables from $10 to $500 million. She reported that she not only succeeded, but reached $1 billion per year.  She also commented on the common misconception that green energy is more expensive. In some cases it is, especially if we keep subsidizing non-renewables, but there are multiple cases were it is not. For example, most of the energy in DRC comes from oil that in many cases needs to be flown into the country. How hard could it be to beat that?

Beatriz Perez, Coca-Cola Chief Sustainability Officer made a very pragmatic argument. Greening your company is not only an environmental duty, but it also increases efficiency very fast, allows companies to sell goods at lower prices and helps secure the production pipeline and resources (water security is a great concern for any beverage company). In essence, it brings returns on investments in the short, medium and long term.

Mike Brown, CEO of Nedbank, gave an overview on how his company has worked internally and externally to green its operations and services.

The main message of the panel is that creating green economies is not about about “sharing the burden,” but it’s about realizing there is a whole new way of making things better. It´s about realizing that changing the business model is a good thing, and the time is now. Even putting a price on carbon is not necessarily a cap on economies, it is an incentive for competition on efficiency, on innovation. Siemens noted that already 30% of their revenue comes from renewable energy. This new market is here, it is huge and growing, and it´s a priority at hand.

Roughly 20 minutes of discussion focused on criticism of “the anti climate change mafia,” with strong stances expressed by every panelist and clapping from the audience. Christina Figueres started this discussion when exploring the limitations for faster, stronger action and its consequences.  It was noted that the US generates most of this push back, which harms the task globally. After some debate the conclusion was reached that companies ought to be clear on where they stand, because above all, it´s about “reputation, reality, image and responsibility and truth.”