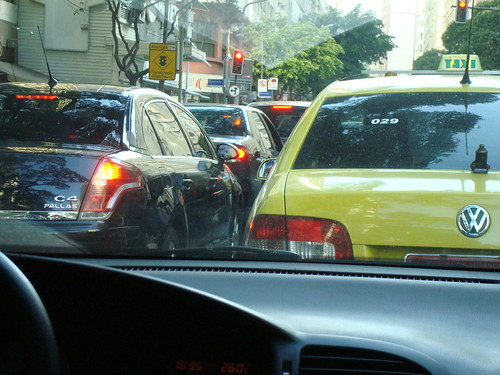 Rio+20 [my post about the conference here, this is a rant on the traffic] had 45.381 participants from 188 countries, which included 100 heads of state and their staff [source]. Now, the city of Rio de Janerio has 6 million people, and 2 million cars, in 5000 km². Furthermore, there seems to be a automobile loan bubble, similar to the house loan bubble in the USA, that has been injecting cars into the barely increasing roads of the city. You can already see how logistics in Rio+20 are, at least, very tricky. 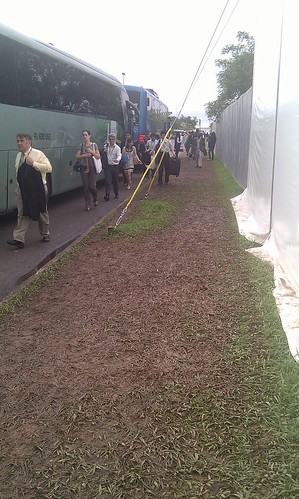 The green wears out at the UN conference

The conference provided free shuttle buses between the hotels and the conference venue, which is a 30 minutes ride with no traffic. Taking the official schedule of routes and hotels, we can make a rough average per hotel of around 60 minutes. Consider that as a VERY optimistic threshold, since there is lot´s of traffic. One day it took me 60 minutes, the next 120.

On the first day I got an interesting offer from Petrobras. They were providing free rides to get to the conference on their company cars, directly to the venue, without stopping unlike the conference buses. They only wanted my name, email, and to show me a video on their biofuels initiative. Probably this one. At that point, with the cumulative desperation, and the curiosity, I accepted. The ride, I must say, was much quicker (small car, no stops). Unfortunately the driver forgot to show me the video, even when I asked him.

On Wednesday I planned to get early to attend the session on metrics to measure progress at 9 am. I left my Airbnb apartment at 7am towards the conference bus stop. When the first bus came at 7:40am there were worth 2 full buses of people waiting. Now picture that. Participants of a United Nations conference to bring together world experts on how to grow together, on formal attire, dashing towards the bus door, elbowing each other, on their perfectly ironed suits. We all had reasons to be worried and wanted to get early to the conference venue, but when the need strikes, it makes us egoistic and unpolite, even on a UN conference. I had estimated were the bus would stop, and I was right, so I was basically pushed into the bus. It was that bad.

The next day I went at the same time. Interestingly, people arranged themselves into a perfect line and waited for the bus. It also turned out that my president was hosted on that hotel, so I stepped out the line when I saw his car with the flags to make some pictures... and may be also get a ride (carpooling? after all I was the only spaniard around and I had conference credentials). When I came back to the line, the very nice couple before me (Anna and Dave) let me go back in, and I had the pleasure to get to know them and their wonderful story. Somehow, apparent behaviour snowballs. If a few are considerate and polite to make a line in the beginning, the rest will align. Early model behavior can make a difference. Every action is a vote for the world we want to live in, specially if you arrive early.

I can only fear what will happen on the Soccer World Cup in 2 years. After all, the Rio+20 conference is no more than a few days of up to 50.000 people than come to work. World Cup people will be there to enjoy the games, and I am afraid will not be happy sitting 2 hours on a otherwise 30 minutes bus ride.