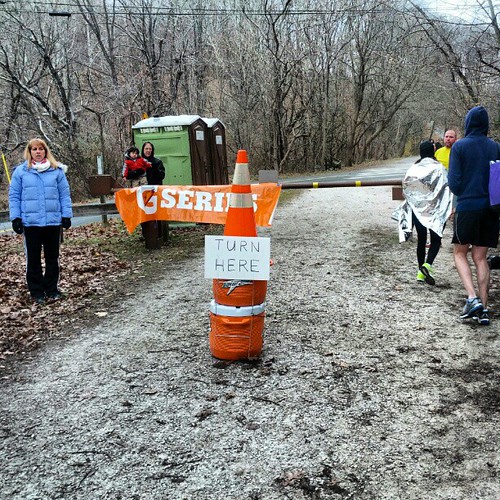 Last week I ran the NCR Trail Marathon in Baltimore. This is only 4 weeks after my first marathon.

I didn’t actually train for it, as it was not on my plans four days before the race. I crossed the start line breaking plenty of recommendations, like getting some time off, new shoes, new clothes, no music for the first time, first trail race, no setting goals or paces, …

Somehow I managed to pull quite an enjoyable race and beating my best marathon time.

A friend of mine was running this race with someone else, but that person cancelled. A thought I could just join my friend. The race takes place north of Baltimore, so he had to take the train the day before, then the tram, get a hotel, go to race, and then come back. I decided to go with him, start the race to help him pace. I had run my first marathon only 4 weeks prior, so I didn´t want to push my body for too much. Deep inside I also wanted to try, as I felt pretty well recovered from the first race.

This is a trail marathon but, thankfully most of it goes using an old train line. This means that it goes through a forest on an unpaved road but is mostly flat. The course is back and forth, with roughly a 75m elevation change in the turn around:

One of the most important rules I´ve read about marathons is never to try something new on the race day. Well:

This is also a small race in the forest with 400 participants, not a 30.000+ in DC, so most of the time you will be alone, and probably among better runners.

This is the School where we gathered before the race: 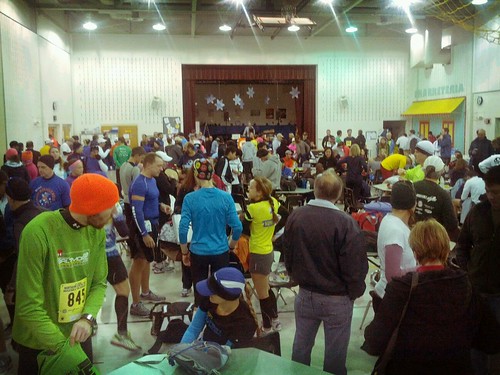 When I crossed the start line, my goal was to keep my pace not faster than a 4:30 marathon, and run along my friend. Right on mile 3 or so, we decided to split ways. I was feeling great so I increased the pace a little bit, but always keeping it slow. Reading my bpm after the race, I managed to keep it well below my anaerobic limit of 150, and I was running pretty smooth in the 130-140 range. It was quite cold so sweating was not a problem, and the new tighter clothes kept me warm without chaffing risk. I was running on a small pack of 4 people, without minding my pace much, any race strategy or anything. It is surprising how your mind just drifts off. I had no music but watching the forest around, feeling my own body and keeping the pace of the group was actually good. I didn´t miss the music at all.

Since I only had 3 Gu energy gels instead of the 6 I used in the previous marathon, I decided to keep the dates I had brought for breakfast and eat 2 every 30 minutes or so. I rationed my Gu to eat one each way on the half point of the back and forth track, and also one the turn around. I have to say that it feel much better on the stomach and I had no lack of energy compared to using twice the gels like last time.

Getting to mile 13 was quite a good feeling. I only had to go back. It is a bit of an irony that you ran all these miles only to find a sign that says, “turn around”. That’s the image at the top of this post.

Despite having only run once since the last marathon 4 weeks prior I was in pretty good shape. I had a small pain on my right hip, which I think might be for running too slow. My hypothesis is that I was running slower than I usually do, so I started to bounce up and down instead of down and forward. That little extra bounce down was being absorbed by the knees and hip, and hence the pain. And of course, the lack of training.

On the turn around I made a small pause to make the picture and also drink water. When I went back, after a mile or so, I decided to do the rest of the race, now slightly downhill, enjoying the forest and pushing a little bit more. According to Strava that has all my runs since 2009, on that second half marathon I made my best ever 400m (4:07min/km) but also best 1/2 mile, 5km, mile, 10 km, 15 km and 10 miles. I think I overtook 50 runners or so in the second half. 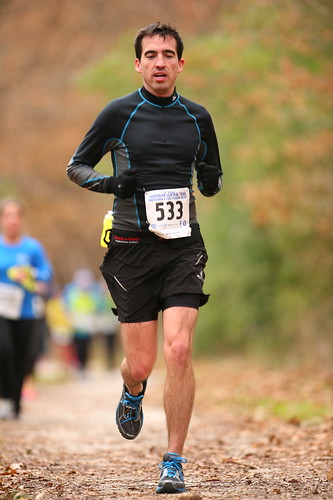 The famous mile 20, where many people hit the wall went by and I was managing the struggle. The pain in the hip was worse but I wanted to finish without walking. Unfortunately mile 24 had a horrendous slope that I just couldn’t do, so I walked it. A fellow runner cheered me to push, as the finish line was just a mile away. It was hard, but I went back to running, and when I saw the end I managed to squeeze a sprint to cross with 180 bpm, a full smile and the surreal fact I had done a faster marathon. The results for all runners are already available. This time there is no location data, so no mapping for these runners. What I could do is create the same visualizations as last time, and compare the statistical results with the last race.

This race is 8 times smaller, and my hypothesis is that you would find mostly good local runners yielding better times on average, runners from far away trying to qualify to other races, like Boston, also faster, and also another set with slower local runners trying the distance.

When I was nearing the turn around I found the runners on the lead. Turns out that the second one, who was already struggling when I saw him, was running his first marathon, and he did not use the water stops, or had any gel. He was crazy fast, and I later knew he hit hard the wall around mile 18 and was taken to the hospital. Not a joke!

Note: For the comparison of this race (NCR) with the Marine Corp Marathon (MCM) I had to normalize the histograms to the total number of race participants. Otherwise the NCR histogram is too small to be seen. So when you see 0.04 on y axis it meas 4% of the finishers. 66% of participants were male. Most women were actually grouped on the 35-40 bin. Compared to the MCM, the 25-30 women were mostly missing, but on the other side, there were more women 35-40. Numbers for women are much more concentrated than men, whose biggest group was 45-50 years old. Overall there seems to be less younger participants. In terms of time, this race (which is 7 times smaller) deviates significantly from the nice Gaussian shape of the MCM. Smaller races don´t yield scalable results. The 4 hours milestome is much more apparent in both men and women, with another peak for women around 4:30. After that time, there is consistently better times for this smaller race than the more popular MCM. Big races attract slower runners. On the other side fast runners are proportionally much more prominent, specifically faster men. Combining both dimensions one gets again the scatterplot of Hours by runner Age and Gender. As I was mentioning in the beginning, the smaller NCR race seems to attract mostly faster runners, regardless of Age. The group of faster men in the outer rim is still apparent but vague.

From this plot one can also see the bigger more famous MCM race is able to attract many more (overall) slower runners, specially on the 15-35 age range.

Most of the results lie within the envelope of the bigger race, which thus indicates that a bigger, more popular race, also includes the type of participants of smaller races.

Also like last time, I try to estimate those who are not able to keep a constant pace, and e.g. hit the wall on the second half. This does not include those who have to leave the race, as only finishers are taken into account. This might be important, as I can guess that the cold temperatures made many walkers quit the race.

NCR runners on this smaller race seem to be able to keep their paces much better. The graph is remarkably vertical without much deviation on either side. The Wall is barely visible with an impact of less than 1 hour on the finish time.

Again women seem remarkably better at setting a pace and keeping it the whole race.